Wearing a long blue pirate-themed funk coat decorated with golden skull and cross bones, George Clinton takes the stage at the British Library conference centre flanked by Nona Hendryx and Chuck Lightning. He and Nona are friends from way back in New Jersey, from when he was a barber (I notice his famous multi-coloured braids are gone, replaced by a peak cap).  As the young and up-and-coming talent, Chuck Lightning sits apart from these two funk legends in tuxedo and cruelly pointed shoes, waiting his turn. 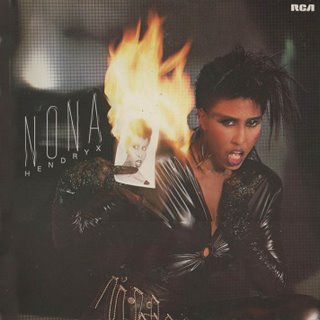 Mr Clinton, as the interviewer Jacqueline Springer addresses him, was ring leader of Funkadelic and Parliament. Nona Hendryx was one third of Labelle then went solo; both artists started out in doo-wop, then realised they had arrived too late for that waning genre. Determined not to be left behind again, they projected themselves into the future, pioneering afro-futurist funk-rock, and on-stage descents from the heaven: Labelle’s lead singer Patti glided down from the gods during ‘Nightbird’ while George Clinton was tucked away in the mothership, the infamous UFO that landed during the Parliament-Funkadelic freakathon.

“We had two motherships,” explains George Clinton. “A little one, about six foot long, that flew over the heads of the audience. I was scared it was gonna fall and we’d get sued. We only used the little one for twenty performances.” The small mothership circled above the audience and then the enormous sixty-foot version descended with George Clinton inside. “It was dangerous up there. I was wearing platform boots, about fifty feet up in the air, fifteen hundred feet up in my mind, and I could easily fall. And the crowd were looking up at me like I was god. And I was not god. I was just trying not to fall.”

His exit from the Mothership, playing the role of Dr Funkenstein in thirty thousand dollars worth of ermine-tails, never fails to cheer me up.

“I just wanted to make people think,” he explains. “I didn’t want them to follow me. I didn’t want to be a leader because reality changes, and you have to change along with it.” (This reminds of John Maynard Keynes’ famous observation that “When the facts change, I change my mind”.)

Chuck Lightning comes into the conversation. He describes himself as ‘Creative Director’ of Wondaland Arts Society, the loosely affiliated group that includes Janelle Monae, and which seems – on the surface – to be in the tradition of afro-futuristic collectives such as Sun Ra’s Arkestra and the Parliament-Funkadelic Mothership.

The differences are instructive. The Arkestra was cultish in the way the musicians gave themselves over to Sun Ra’s singular vision and rehearsed exhaustively to realise it.  I would love to know more about the dynamic in the Mothership, the working process between the sixty people who toured with Parliament-Funkadelic during the peak years of 1974-1979, a time George Clinton describes as “all of us altogether, all of the time”. Was George an autocratic enforcer of quality control, stamping product as it left the funk mines? I am guessing it was more subtle than that. 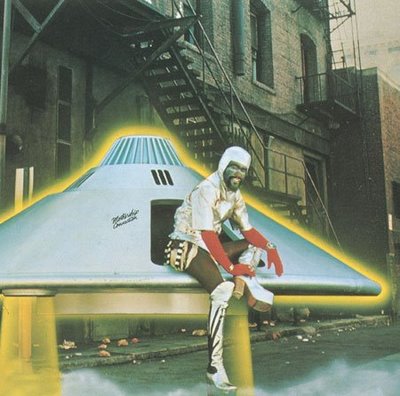 Discussing Janelle Monae’s cover of Flashlight, he is incredulous that she could sing it as if it was a normal song, and not just a collection of incredibly funky decisions arrived at by the band. “The band made it,” he croaks, as if to ask, how could it exist without the band?

I’d been listening to Flashlight that very morning, struck by the strange spontaneous unfurling of its layers: the incredible choppy synth line, the chicken scratch guitar, the chunky thighs of that bass (Bernie Worrell on the mini-moog), the knocked back vocals – how many voices are there on it, 40? 50? Flashlight came off what passed for the Motown production line in Parliament-Funkadelic; that is, not a production line at all but a network of talent from which music emerged. A network that Clinton alternatively tightened and slackened to astonishingly productive ends: I count over thirty albums between 1970-1979 that bear his signature, albums by Funkadelic, Parliament, Boosty’s Rubber Band, Bernie Worrell, Parlet, Brides of Funkestein, Eddie Hazel, and the Horny Horns.

Vernon Reid interviewed George Clinton about the making of Flashlight for Vibe magazine, and his answers clue us into the creative process in the Mothership. Play around, keep your ears and eyes open, and eventually something will emerge. Once it does, switch modes. Grab it and hone it before it wriggles away.

“First of all the track was Bootsy’s track. He didn’t want it. He couldn’t hear it so I took it… First it was just the jam. Give me a crowd like you’re at the baseball field. Then, okay, let’s see how precise we could get that. Bernie [Worrell] aught me about motifs. You get a melody, you have every motherfucker playing it – everybody did that in ‘Flashlight’”.

Trained in the order of Motown but attracted by the renegade funk of James Brown and the renegade rock of Hendrix, the Parliament-Funkadelic process was chaos arranged in such a way that beautiful order could emerge, and vice versa. (“Consciously that was our intention, to do chaos and order at the same time,” George Clinton.)

It is hard to imagine George Clinton describing himself as “Creative Director’ of the Mothership. The title of Creative Director belongs to the formal creative output of an advertising agency. Chuck Lightning’s Wondaland look is sharp with curly extremities: the tuxedo with its clear delineation between black and white is made subversive through the lengthening of the shoes, the plastic framed shades and potent hairdo. Chuck’s hair is shaved at the sides, wild and mohican down the middle, another sharp division, between the organic and the artificial, between the process and the natural. I wonder if the thinking is too binary to be sustainable.

Wondaland state they are “watching Steve Jobs the way Berry Gordy watched Henry Ford”. A funk collective with the ferocious brand control of Apple? Why not? Control is easy. Enforcing brand identity is easy. Coaxing dozens of brilliant works out of creative talent requires something other than control: an understanding of the uses of chaos, the art of guiding without touching, leadership not management, the ability for something to exist in a superposition of this and that until just the right moment for collapse. Mr Clinton knows. Ask him.

The British Library event was organised by Union Black and climaxed with a thunderous standing ovation.

Is it worth asking: who is writing George Clinton’s autobiography?