We are sitting with our children on a rug beside the river. A woman approaches us. She is a stranger and in her arms she is carrying a child.

She says, “Excuse me, would you mind looking after my baby?”

We look at one another with confusion. How should we respond?

“Just while I go for a swim,” she says, gesturing to the river with a slender hand.
She is lean and beautiful in her black swim suit but her face is unreadable.

Our Mums nod and smile and calculate. We are busy negotiating with half a dozen toddlers of our own but we are not the kind of people to refuse a favour.

The baby is a chubby boy who has just learned to walk, and he has the clumsy tippy-toe excitement of that discovery. He is dropped into our party, and he stumbles a few steps into my arms.

His mother walks away gracefully and into the throng.

“What’s your name?” we call after her.

She whispers her name but it is too exotic for us to grasp.

“Jack,” she calls back and then disappears over the edge of the bank and into the water. 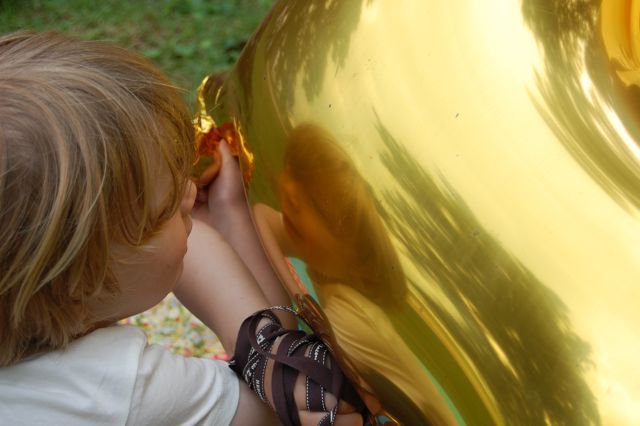 The river is tidal. At noon, it was a narrow sinuous channel cut into heaving mudflats, then the water trickled back from the estuary like a rumour, heightening everyone’s excitement about the arrival of the river itself, as if it were a famous guest at a party. There is a diving board and a wild swim. We have not brought our costumes. We are content to miss out. Parenthood, for us, is about missing out. The river wants beautiful women with eyes that are unreadable. Why is she such a mystery to us? Is it because her eyes are slightly too far apart for us to apprehend? Or is there something in them that we have decided to overlook, a cold impatience that modern etiquette requires her to be thankful of our help, and not merely insist upon it.

Jack’s cry attracts a beautiful man with a mustang’s mane, naked under an insouciantly draped towel. The beautiful man glances at us to check that we are not failing in our duties. He is not a Dad, we can see that in his stomach muscles, yet he feels responsible, not for the boy, but for ensuring that we do our job. He looks down at us and reassured that the proper measures have been taken – the annexing and enclosure of the golden horse balloon – he walks on by.

Boys somersault into the river. They swim wild, with different rules to the municipal pools of our childhood; bombing, diving and petting are encouraged. Emerging from a secluded meander, a naked man and woman wade hand-in-hand, their skin glittering in the sun. They are imperious in their freedom. We are in the shade.

Jack’s mother returns from her swim with wet hair and gooseflesh. She walks by without acknowledging us, finds a towel, and begins a conversation with the beautiful young man with the mustang mane. We seek her gaze. She is unreadable to us. More of us arrive. Our picnic rug is overwhelmed with children, all of whom want the golden horse balloon that Jack is chewing.

One of us has to go to the toilet. We will be too few to safely care for Jack. Our Mums agree that he should be returned to his mother, and that I should do it.
I go to her. She is surprised to see Jack in my arms.

She blinks, allocating a microsecond for me to reconsider my actions.

She speaks quietly, without catching my eye: “he looked very happy with you all. You have other children with you. He likes other children. And you all seem such nice people.”

I explain that I have to go to the toilet and that we only have so many pairs of eyes. This disappoints her. She looks up at me. I see an unflattering reflection of myself in her eyes.

It takes her a moment to understand my inference. When she looks at the river, she does not see danger, she sees pleasure.

When I return from the toilet, Jack is back on our picnic rug; the little boy is once again grasping and gnawing at the golden horsey balloon. And he is holding toy cars in his chubby palms, cars that belong to one of our boys. Our boy has been instructed to share but he doesn’t like it. We don’t know what to think. Is it right that we make the small sacrifice of looking after one more child, so that this stranger can have an hour to herself? Just because there are no words, in our language, for the question, “Excuse me will you look after my baby?”, it does not mean that we should disapprove of this custom of engaging strangers in childcare when an opportunity presents itself. 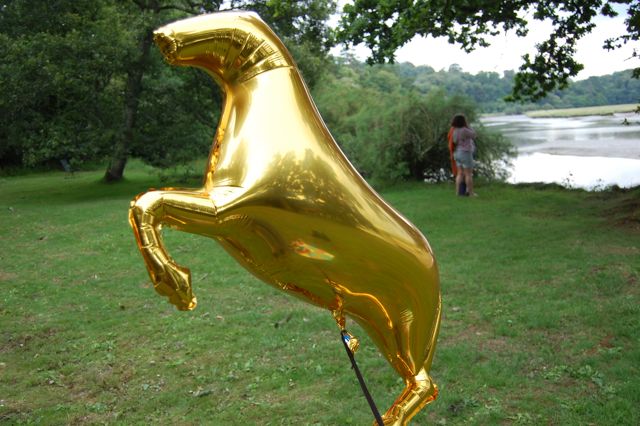 The river deepens. Intimations of dusk. We are growing hungry, the children fractious and cold. Where and what shall we eat? Is it time for cardies and long trousers? We must return to our camp. And what is to be done about Jack? Our littlest girl scowls at the boy; she knows that he does not belong and can’t understand why we allow him to take such liberties with the golden horse balloon.

Again, I take Jack up in my arms and return him to his mother, who is still chatting to the beautiful man with his casual towel.

I tell her we are leaving and pass Jack down to her. He cries.

Jack makes the brum-brum sound of a toy car and strains in her arms to return to our rug.

She strolls over to our mothers, who are busy packing to leave, and she finds what her son wants, a pair of toy cars, and she quickly steals them.

We leave the river and return to our camp.
***
We are sitting under the gazebo. There is pasta and pesto for tea. A few of our children are with us and eat quietly, but most of our children are out there roaming around alone and who knows where. We believed that they would return for dinner. We were deluded.

Has anyone seen Hector?

The last time we saw Hector he was throwing a wellington boot at a duck. We consult the children about his whereabouts. They saw Hector trying to sell ripped pieces of paper to the people beside the river. Alexandria wonders if Hector is with his father, Will.

Has anyone seen Will?

Yes, we saw Will doing card tricks at the Boat House. And didn’t he say something about going fishing?

Has anyone seen Flint? asks Jones. 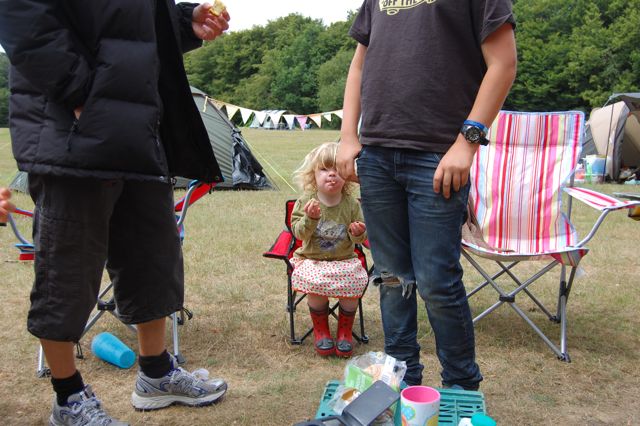 We make a show of looking to our left and to our right, and under the deck chairs, but Flint is nowhere to be found. We deliver reports of Flint: Cathy saw Flint at the circus tent. Noni saw him amongst the chefs upon the green. Kirk saw Flint riding on the back of a quad bike driven by a copper-coloured clown.

We don’t know who Kirk is, or why he is here. Kirk freaks us out.

Here’s Hector. He arrives back at camp with the bemused look of a reveller who popped out of the party to buy another bottle of champagne and returned to find the guests transformed into apes: who are these people, wonders Hector, and why aren’t any of them my parents?

Has anyone seen Mama, Hector asks. She was here a moment ago. Has anyone seen Papa? Kirk glimpsed Papa roaming the woods wearing the head of a wolf. Kirk is not helping. Kirk appeared last night, attaching himself to our camp with the blithe confidence of a lonely posh lunatic. Kirk concerns us.

Matthew leaves a message on Papa’s phone. Kirk wants to show us the decanter he bought from a stall holder, but the decanter is already broken, the spout jagged glass: who would have guessed that a decanter would break in the middle of a festival? Kirk resolves to return it to the stallholder. We hope that he will go. Kirk is still talking about the decanter so we find it hard to concentrate on the whereabouts of the children.

We need someone to hold the baby while we put a tent up. Our baby is only a month old. Kirk volunteers. I am so broody, he says, and before we can say NO! Kirk takes the baby from us. Her big head lolls briefly on her weak neck and then settles into the crook of his arm. One handed, he carries her off and looks at us, expecting us to smile at the sight of him, Kirk, with our baby, and it takes all our strength to smile despite every cell of our being screaming. We cannot concentrate on feeding the children. Time slows, and we hold our breath as Kirk struts around the camp, showing everyone his new baby and his new but broken decanter. 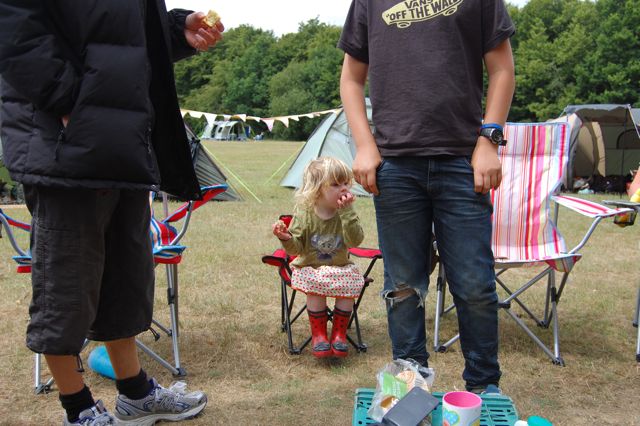 Our worst fears are interrupted by Hector. He is still looking for Mama and Papa, and his big brother. Have you seen Albert? he asks.

Has anyone seen Albert?

He jumped into the river, we remember, he somersaulted in from the edge of a sunlit wheatfield.

From a small tent, there comes the halting cries of a little girl. She fell asleep and when she woke up, Mummy was gone. Where is Mummy? Which Mummy, we wonder? We are losing track of ourselves. It is getting dark and the children move so quickly. The little girl wanders away through the guy ropes lead by another girl that we have never seen before, who is dressed in a tiger suit. We go to stop them but then someone asks us, where is Albert? Have we seen Albert’s Papa? And do you think a baby should play with a decanter? And in that time, the little girl and tiger disappear into the dark, and we cannot follow because we have so many children here. We chew our cheeks and bite our lips and wring our hands.

A mother arrives with a friend and couple of cocktails from the bar and an apology for leaving her little girl with us, in the little tent.

But you didn’t tell us you were leaving her here, we say. So we didn’t know.

The mother looks in the little tent. Her girl is gone. Where is she? the mother panics.

She left with the tiger girl, we say.

No one knows any tiger girl.

They were here a minute ago, we say.

No, I say, it was ten minutes ago.

At dusk, the tents rustle quietly in the wind. Mothers call for their children, and the wrong children answer them. Mosquitos hover over the river like patches of white noise.