It’s hard for 21st Century whippersnappers to appreciate the impact Nigel Kneale’s 1950s Quatermass serial had on the nation. Back when there was only one channel, and the programmes all went out live, a writer could step out of Alexandria Palace, look out across the TV aerials rigging the dark London skyline and know that everyone with a set had just been watching his show. 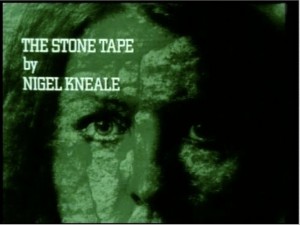 Pubs emptied for Quatermass, especially the second series, Quatermass And The Pit, a landmark in sci-fi horror later remade by Hammer. That’s why the BBC – when faced with filling the Christmas Day schedule in 1972 – turned to Kneale, commissioning a ninety minute ghost story to follow the traditional Morecambe And Wise special. The Stone Tape was the result.

A group of computer experts (think ZX Spectrum guru Clive Sinclair and his Open University mates) hole up at a stately home to invent a data storage medium that will restore Britain to the forefront of the information revolution and, as their leader Peter Brock (Michael Bryant) says, “put the boot in old Nippon”. But while clearing out a room in which to store their anachronistically immense computers, they disturb ghosts. Being scientists, the researchers decide to knuckle down and study the ghosts, discovering that the shades appear to be unthinking recordings of old presences, imprinted upon the stone walls, rather than self-aware phantoms. Could this stone be the storage medium they are looking for?

The performances have the exaggerated, stagey quality typical of the era, particularly Bryant’s philandering team leader, who fills out his beige slacks with thrusting actorly presence. Jane Asher is both heroic and disturbed as his mistress, doing some decent work before her career went into a period of doily purdah. Aside from the script, the best work here is done by the BBC Radiophonic Orchestra – their avant garde electronica burbles sinisterly in the background; the robotic death-fantasies of physics teachers.

Made on the cusp of the peak year in British horror (Don’t Look Now and The Wicker Man were just around the corner) The Stone Tape is profoundly disturbing, especially at the climax, which taps into deep evil.

2 comments for “The Stone Tape”