I was being fitted for my wedding suit when Raymond called. I told him that it wasn’t a good time to talk, that I had a tailor attending to my inside leg on a hot day. Raymond ignored me and said: “You promised me that, if I ever really needed it, you would move heaven and earth to help me. Exact words. Heaven and earth. I would have been happy with just one of them.” 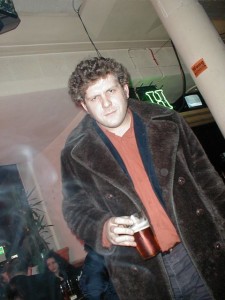 Had I really promised him that? In the memory-lagoons, a flatfish stirred, straining to shift itself free of the mud. Yes, I remembered a party from our bohemian salad days, sometime in the last century, when I was editor of Drug Porn and arrogant with all the attention that flared around that position. I have not forgotten taking Raymond under my arm at the bar. At this time (somewhere between 1994 and 1999, five years of which I have barely two weeks of memories) he was fierce and sharp and wrote fantastically detailed stories about the hilarious catastrophe of his daily life. I could see even then that it would not turn out well for him. With no facility for compromise, and an Essex boy’s contempt for the liberal bourgeoisie, he was ill-fitted for success in the mediasphere.

I tried to pass on some wisdom:
“Never hold a beer and an opinion at the same time.”
“When on a first date, don’t mention that you are out on bail.”
All I had were callous aphorisms, linguistic narcotics, which were the main form of communication in that age of ideas.
If it was the mid-Nineties, then I was wearing a fake fur coat and t-shirt pronouncing my magazine’s logo: a silhouette of a man taking a woman from behind while snorting a line of coke off her back.
We all thought we were very funny back then.
Devising and launching Drug Porn from the back room of my Hackney flat earned me notoriety but no money – at least, not directly. There was a lucrative sideline in minor media punditry and youth consultancy. During the great brand realignment (a recalibration of capitalism’s iconography to accord with the desires of the latest generation) I even found myself nude under a white sheet, hosting ayuascha self–discovery sessions for six marketing managers in a cellar in Clerkenwell. Having communed briefly with the snake god, they all agreed to redesign their brand to more closely resemble a caduceus.

I have copies of the magazine lying around here somewhere – politically correct erotica interspersed with columns on over-the-counter medication (and how to mix it!), ethnovoyeurism on the latest Amazonian entheogen, interspersed with the drug pulp of the era – “Oi you slag I’m raggin’ me tits off” etc. There were always young Oxbridge journalists keen to keep their hand in with seriousness by penning essays on the hedonistic indiscretions of Petronius, Hassan I Sabbah or David Icke. There was always another outrageous ironic joke to crack, another fashionably lackadaisical artwork to feature. With retrospect, the notion of an alternative magazine is as preposterous as an alternative arms manufacturer, or a countercultural oil company. It is a consumerist medium. Hopeless to deny it, really. It was a compromised endeavour from the outset, our outlandish stylings quickly co-opted into the imagery of youth-orientated brands. Even the free tin foil helmets tipped on to our madness issue were sponsored by a video game. As the decade inflated, there was less and less time to put the magazine together and our shock tactics paled in comparison to the kind of things eight-year-old girls were downloading from the internet. The end came when three of the drug-addled junior staff tore the office apart in search of listening devices, convinced we were under surveillance.

The final issue signed off with a valedictory verse called ‘My Nineties’.
My Nineties
Nineteen ninety.
“Do you want one of these?”

It must have been sometime during this period that I made my promise to help Raymond.