My memoir Self & I has been reviewed widely in the UK. Here is the review in the Times Literary Supplement. 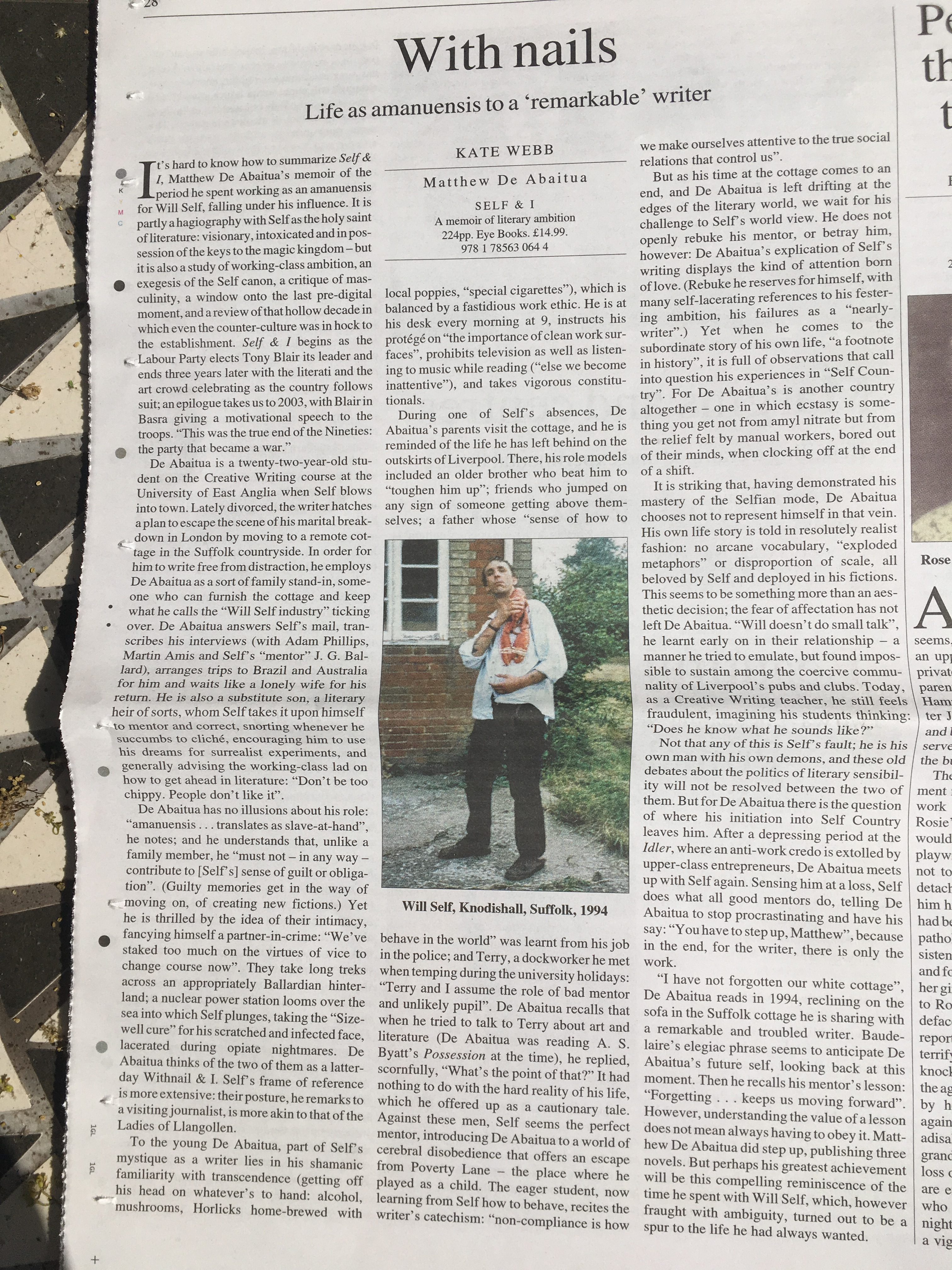 Review in The Spectator, Financial Times, The Guardian.

You can also listen to me talking to Janice Forsyth about Self & I to Radio Scotland.

See also the review below from The Oldie.

Where there’s Will…
Self & I By Matthew De Abaitua

This book comes very close to being a classic memoir of literary apprenticeship. It’s a rich field – one thinks of De Quincey on Wordsworth, Hazlitt on Coleridge or Richard Kennedy’s A Boy at the Hogarth Press – dominated by one masterpiece, Boswell’s Life of Johnson.

As well as being a full biography, the Life is also a study in passionate discipleship. When Boswell described Johnson attempting to flip the corpse of a drowned cat over a weir with the aid of a long pole, he was clearly aware of the comic opportunities available to the hovering scribe.

Don Quixote and Sancho Panza are the supreme examples of the master/disciple relationship, where the conceit of one can be endlessly entangled in the credulity of the other.

The Quixote to Matthew De Abaitua’s literary Sancho is the novelist Will Self. In 1994, De Abaitua, then a 22-year-old graduate of the UEA Creative Writing MA, found himself being interviewed at a party for a job as an ‘amanuensis’ by the recently separated, 32-year-old Self. At a second interview, conducted at the remote Suffolk cottage where Self lived in retreat, after a ‘special cigarette’ and some preliminary shooting at beer bottles with an air gun, De Abaitua receives his job description:

‘I am to acquaint myself with the oeuvre – not merely his works, but the works he will be writing about. I must read the library of influential literature in the study, and related works concerning drugs, psychoanalysis and anthropology. Secondly, I can bring no Class A drugs into the house, nor am I permitted to drink more than the government-recommended 24 units of alcohol a day. I am to do whatever I am asked. Nothing is beneath me: laundry, transcriptions, fetching and carrying.’

‘The oeuvre’ is authentic Self – nor was there anything deceptive about the job description. An hilarious sequence of episodes follows, including nudity, gasmen, dangerous driving, game birds, crazed phone calls from Brazil, the inevitable lobster à la Nerval and long night walks from pub to pub, all peppered with Selfian pronouncements and bons mots.

Most evocative perhaps is the account of the hungover pair taking ‘the Sizewell cure’, a dip in the warm sea surrounding the offshore pumping station attached to the nuclear power plant a few miles from their cottage, a numinous spot for psychogeographers.

‘We should live here,’ says Self on coming across a house to rent in the lee of the power station overhung with sizzling power lines. As the innocent De Abaitua’s foil, Self is a truly majestic comic creation – ‘We’re like the Ladies of Llangollen out here,’ he remarks to a visiting journalist by way of explaining their ménage as he scrubs potatoes.

One only wishes their partnership had endured longer than six months. Had De Abaitua stuck to Self like Watson to Holmes, we might have come into possession of a literary fiction to stand alongside even ‘the oeuvre’ itself. As with all great comic characters, Self has no sooner left the page than one wishes him back. This sense of loss marks, if not a flaw, then at least a faultline in the book.

Self & I bears a subtitle: A Memoir of Literary Ambition. Eking out, and eventually supplanting the ‘Will Self Industry’ story are more earnest chapters. They’re devoted to the author’s parents, his upbringing in Merseyside, relations with his girlfriend El, and his transformation from a provincial student to London literary insider to novelist/creative-writing teacher.

These are excellent – one of the book’s strengths is its sensitivity to changes in the idea of the literary life as embodied now by Self toiling away with a typewriter in a muddy cottage, now in the apparently epicurean, but strangely hydroponic world of The Idler magazine and its parties. But they tell of an ambition tamed and brought to reason.