I represented the Idler at Opium magazine’s Literary Death Match and walked away with the coveted winner’s medal. 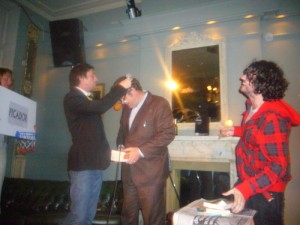 I particularly enjoyed meeting Mercy’s Nathan Jones, and we talked about Liverpool and literature. The story I read was called Beyond Help, a much-edited tale of Sebastian Blast first published in the Idler. Reading this tale of a deranged obese television agent to a fashionable literary crowd in Islington, I remembered my first performance of the story, which took place about an hour after I had finished writing it in one furious session. The performance took place in a venue called the Tardis which was a shadow street beside Turnmills. It no longer exists, as it was demolished to make way for the expansion of the tube line. On that first night, I read the story with such venom that the audience was pretty shocked – apart from a few members who recognised the real counterpart to my fictional figure of Blast.

I should write more about the Tardis as it was a crucial venue in the 1990s, hosting all our Idler parties and various other events that were very much of their time, mixing celebrity criminals with counter-cultural writers, liggers, and outre film stars, not to mention liberal quantities of the then-illicit absinthe. The Tardis was unlicensed and we were forbidden to write about it by the proprietor on pain of exclusion; also it was pre-social media, and as a consequence, there is little or no record of it ever having existed.

But I remember it. And every time I go to Farringdon, I pause by Turnmill Street and gaze down into what was once our labyrinthine playground, and realise that I am fortunate that the venue of my youth has been demolished so that I do not have to suffer a new generation occupying it.