My next novel IF THEN (Angry Robot, September 2015) is on Fantasy Faction’s list of the most anticipated novels of 2015. It’s a publishers’ list. Readers are yet to get their hands on it. I’m keen to discover what readers make of the novel.

Phil Jourdan’s description below gave me a first glimpse into the novel’s themes that might resonate with readers, and a reminder that my fictions can be disturbing.

‘Matthew De Abaitua’s sci-fi interpretation of the First World War set in the near-future is the very best kind of troubling. He’s not just telling a good story: he’s playing with the concepts of time and space, the naturalization of technology, the meaning (or lack of meaning) in human suffering, the economic and historical forces we just don’t understand… but, yes, he’s also telling a damned good story.’

So what is that story?

I’m not ready to divulge. I’m still toying with describing IF THEN as ‘Austerity science fiction’ as it was inspired by the jokey articles about Greece selling their islands to pay off eurodebt, and my unjokey experience of poverty and marginalisation during the Great Recession.

I was going through my initial ideas and came across a diagram that attempted to connect the areas of interest and contrary impulses that lead to the novel. I spend a lot of time teaching creative writing; that is, explaining inspiration with the patter of reason and  principles. This diagram reminds me that my methods are ways of disguising the profoundly irrational way in which I think. Click thru to view. 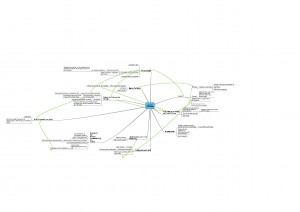