My new novel IF THEN is out now, published by Angry Robot in the UK and US.

We launched the novel with signings at Forbidden Planet in London and Birmingham, and then a packed party in Broadway Books in Broadway Market, Hackney, just down the road from where I live. 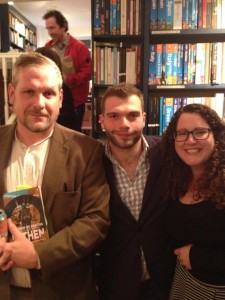 I’m keen to discover what readers make of IF THEN. To me, it represents a substantial advance in style, form and content over my debut novel The Red Men. There is a seven-year gap between the two novels. I’ve worked hard over the last four years in particular to improve my grasp of the various aspects of novel writing.

It may seem fussy to always set the title in upper case. But I prefer it that way as it reminds me of the software I used to write, from which the title is derived.

IF THEN has been listed by both I09 and Kirkus Reviews as being among the must-read science fiction and speculative fiction novels of autumn.

Early reviews have been positive.A round-up of them is below. I expect there will be more reviews to come.

“Matthew De Abaitua has written a novel about employment, about daily labour, about the dignity or otherwise of the working individual. IF THEN is a love story, the history of a marriage, a topical meditation on the end of capitalism; best of all, it is a bone-deep, blood-sweet British fantasy, naive and ingenious as William Morris and as warpedly nostalgic as Richard Jeffries’ After London. It is also the only intelligent book ever written about the technological singularity. As disturbingly hyperreal as any Pre-Raphaelite painting, IF THEN imagines what the end of history really will really look like, what’s really at stake, and maybe, just maybe, what we can do about it.” Simon Ings, author of Wolves.

‘Besides a surreal atmosphere, there is some perfectly executed and beautifully described weirdness in IF THEN. Every once in a while, just when things are starting to feel, if not normal, consistent, De Abaitua drops in reminders that the people of Lewes live in a manufactured reality, carefully controlled by something that can quantify, but not understand, humanity. I was drawn into James’ perceptions over and over just for us to be reminded that people and their actions were not genuine.’

I can’t recommend this book more highly. It’s slipstream fiction for polymaths. IF THEN flips off expectations of genre and leaves me feeling like I’m riding its shockwave into the future of literature.’

‘IF THEN is personal and focused on small details, while at the same time addressing the big questions of life and what does it mean to be human. In a way it is an example of the personal made political, which is something that I really believe. Even if you think this isn’t a book for you, I’d urge you to take a chance on it, it really is a fascinating read.’ Susan Hated Literature

‘What follows is a meditation on violence and war. James finds himself working with Hector as a stretcher bearer in an artificial reconstruction of the Gallipoli campaign. Through James’s eyes we see the brutality and senselessness of war. We are forced to reflect on the way modern society normalises war and conflict for the many by concentrating the horror of it in a few. If Then asks us what value we place on people beyond their role as economic units, and whether we would rethink our actions if we were able to truly experience their consequences at first hand.’ Liwella, Astounding Yarns