Like a lot of writers, I work in bed. The stolen time between dreaming and getting out of bed is vital for the compositional process. In this stolen time, I imagine the story, dream out what is to be written that day, and what will happen next. In dreams, I mine the rabbit hole and then just afterwards, I take a look at my haul and decide what to keep and what to throw back.
Our family life is busy and demanding, especially in the morning. I have to force myself to lie in bed throughout the various travails, pulling the duvet firmly over my head to screen out the sound of children arguing over cereal so that I can steal more time with dreamstate; extra time in bed can save me hours if not days of hacking away at the keyboard.
My wife is as understanding about this process as our circumstances allow. We play out variations upon the following conversation:
‘Are you going to get out of bed now?’
‘I’m working.’
Exasperation.
‘They are being sods.’
For the avoidance of doubt, “They” are the children.
‘But my characters live here.’
‘Under the duvet?’
‘In this moment. Please, I must return to them.’
‘Under the duvet.’
But they’ve gone. Chased away like fairies at the bottom of our garden.
There is no such thing as the unconscious. Dreams are random flushings that only become narrative at the moment of telling. I know all that. Still, writers continue to report peculiar phenomena when they are in the throes of a big fictional work. Books seem to fall open at just the right page. Overheard conversations supply exactly the right words. A road sign is suddenly pertinent. In a state of hyper-connectivity, everything pleads to be included in your creation. These are the times when it is necessary to go down the rabbit-hole. Slip the leash of control, let the imagination range around.
It was in such a mood, standing on Wilton Way in Hackney sometime in the previous decade, that I decided to incorporate into my novel The Red Men a vision of an enormous dosser on a park bench, a sozzled Gulliver attended to by numerous white-suited Lilliputians. In the novel, this giant figure is called Leto, a reference to the God Emperor of Dune, and he presides over an organisation called Dyad:  Dyad is about living in the land of do-as-you-please, the unbounded imagination, all the delights of the dreamstate and none of the horrors of breakfast.
The Red Men is a dialogue between the reality principle and the pleasure principle, between subordinating oneself to the will of others – as the narrator Nelson has done – or giving into the desire to dash one’s inner self all over the streets like so much terrible graffiti.  After writing the scene with the enormous drunken Leto, I decided to flick through the pages of a book and search therein for a portent as to whether The Red Men would ever find a publisher.
The book I chose for this task was Robert Anton Wilson’s Cosmic Trigger, as a good a resource as any for writers who have chosen to go headfirst down the rabbit hole.
I flicked through the pages of Cosmic Trigger, stopped at random, and jabbed my finger at a page.
The word I jabbed was ‘monad’.
This was peculiar because the name of Dyad’s rival company in the novel is Monad.
And monad is quite an unusual word. It crops up a bit in philosophy. According to Google’s Ngram, its peak usage was between 1895 and 1900, around the upsurge of Bergsonian philosophy, Theosophy, Vitalism, that kind of thing.
Nevertheless as portents go, it had – as they say in the corporate world – traction.
I’d already chosen the brand for Monad, taking it from the Hieroglyphic Monad of Dr John Dee, the Elizabethan wizard.

As I said, these kind of coincidences crop up a lot when you are writing. When you have your ear to the glass, and the glass is on the wall, and on the other side of that wall live the beings who stalk our imagination.

Alan Moore had warned me it would happen. I’m old enough not to dwell upon it.
Last week, after signing off the revised proofs of The Red Men for digital publication, I put my feet up to relax. My wife went to the shops and I had childcare to catch up on.
I thought back to the last time I had signed off proofs of the novel. I’d just sent them off to Shynola for them to read; they were deciding whether or not to go ahead and attempt to make the novel into a film when a minor character from the novel, a local figure I had drawn upon, knocked on their door.
They took it as a sign and decided to option the book.
This kind of thing happens all the time.
My wife returned from the shops.
‘Look at this,’ she said, holding out her phone. ‘I saw it scrawled outside Sainsbury’s.’
And this is what she saw. The Monad symbol in orange paint.
Happens all the time. 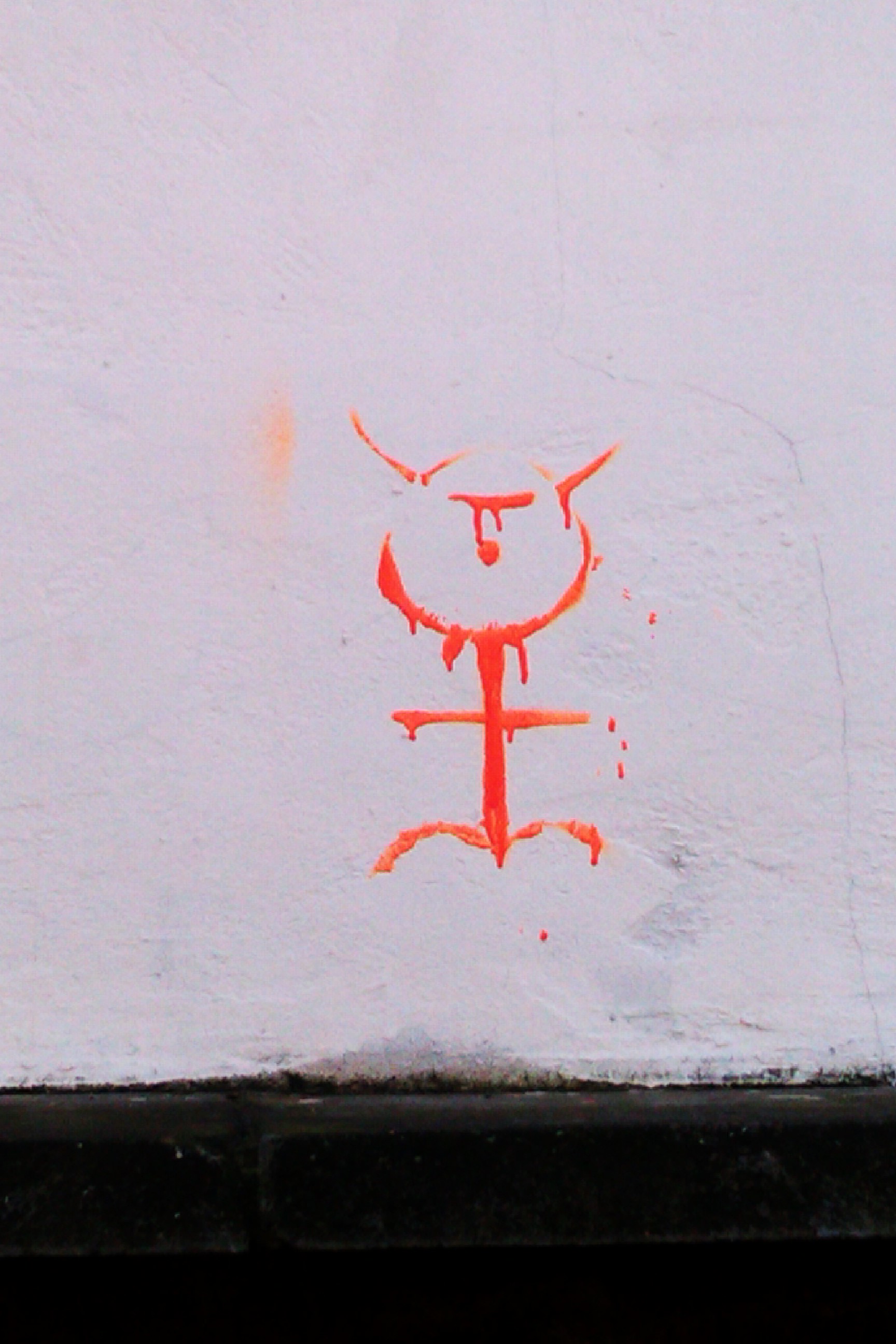