My third novel The Destructives is out now, published by Angry Robot in the UK and US. The first review was at Strange Alliances, closely followed by positive in-depth coverage from Barnes & Noble. The reviewer Sam Reader writes “The Destructives doesn’t so much subvert expectations as shatter them utterly. It’s dense, but it also moves; it’s both a breakneck thriller and one of the year’s most thoughtful works of science fiction.” The review has the headline ‘Might Be the Most Mind-Boggling SF Novel You’ll Read this Year’. You have been warned.

Also, SFX magazine described The Destructives as “a marvellously written book, whose invention and surprises gain momentum until its boggler of an ending.” Here is a snap of the full review. 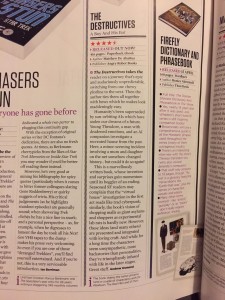 3 comments for “The Destructives reviews”