My short story The Destructives is published in Arc 2.2, available on tablet, mobile etc. It’s pleasing to be in such august company (M John Harrison, Ned Beauman, Joanna Kavenna, Jane Rogers, Michael Marshall, Simon Ings – and that’s only the authors I have on the SF bookshelf behind me). 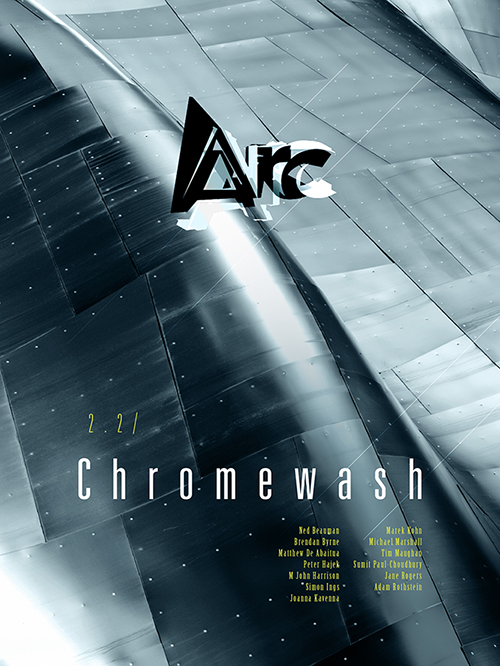 As short stories go, The Destructives is pretty long – about six thousand words. I wrote it in the wake of finishing a novel, from an initial idea of ‘Mad Men in Space’. It’s set under the ice of Europa and so I was able to use the latest discoveries about that intriguing and promising moon.

Here is an extract:

The pod surfaces in a moon pool within the habitat. As the client promised, Alex is met by Petra Elisson, the middle generation of the would-be-dynasty of the Europan Elissons. Petra is in her late thirties, with good skin, her ethnicity somewhere between New York and Tokyo; she is let down by provincial tailoring and a haircut so unfortunate it merits a card of condolence.
Alex corrects the line of her trouser suit and the sweep of her jet-black fringe then steps out onto the landing stage. The air pressure is not quite right and neither is the gravity. Disembarking with dignity requires some concentration.
“Pleasant flight?” asks Petra Elisson.
“Always.”
“The rest of the team not coming?”
Alex points upward in the direction of outer space.
“The destructives remain on board The Significance for now.”
“Then they will miss out on all the fun.”
In response to Petra’s joke, Alex finds a suitable smile.
The walkway is a narrow girder surrounded by illuminated transparent tubing. Outside, a question mark of megafauna swirls through the dark water. Her eyes will have to adjust before she can appreciate the subtle differences of darkness.
“We’re all very excited about your presentation,” says Petra. “It’s an honour to have the creatives who reinvented the flutterby working on our account.”
She wants to correct her: not creatives, the destructives.
The flutterby had been developed as a flying protein snack for hard-partying twentysomethings in lowgrav environments but the novelty of a self-propelled salty treat could not offset cultural aversion to eating anything that resembled an insect. The product trials tanked. The destructives repositioned it as the snack for feliners who really like to play with their food.
The existence of hybrid species such as the feliners and caniners had threatened heresy against market fundamentalism. But the trajectories of the hybrids were plotted, and it was predicted that they would not become a threat to the culture. Indeed, hybrid species opened up new product categories in everything from snack foods to home furnishings, and as hybridisation was accompanied by a drop in intelligence, clients didn’t have to spend so much on media to convert them into customers. It was just a shame she found the hybrids so repulsive. But then, as Bougas said, when he came into her hotel room and opened his robe, revealing a satyr’s gut and an afterthought of genitalia: “Disgust, madam, is a cultural construct.”

The story is complete in itself but it is part of a much larger world, a much bigger story, spanning generations.

Arc is published by the New Scientist and is an inspiring, thought-provoking collection of future shock and other speculations.