I met Shynola in the bar of the Phoenix on Charing Cross Road to pick up a copy of their script for The Red Men, delivered within a wrapper embossed with their redesign of the Monad logo. Everything within that wrapper was new to me, as I had no part in the process of turning my novel into a script. 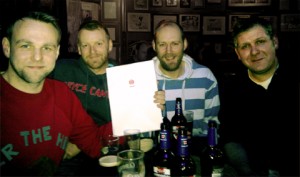 The Red Men novel is, intentionally, overfull. When writing it, I gave into the pull of another world, and into the dark serendipities of Hackney. An adaptation would have to find its own way through the various layers of reality within the book, and that’s what Shynola have done, making some very clever structural changes to stay true to the intention of the novel, while remapping it for the medium of film.

1 comment for “The Red Men script handover with Shynola”