Continuing the series of excerpts from my essay on the Kindred of the Kibbo Kift, due to be published in The Idler in 2010.

A prehistoric track stretches across 250 miles from the Dorset coast to the Norfolk Wash. For over five thousand years, people have walked or ridden this trail. The first section we know as the Ridgeway, a chalk ridge beginning in the uplands of Wessex and bisected by the River Thames at Goring Gap, rising above the low ground and valleys that once would been treacherous with woods and marshes, wolf and boar. 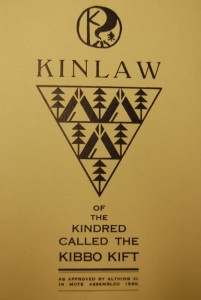 Kinlaw of the Kindred of the Kibbo Kift

At Ivinghoe Beacon in the Chiltern Hills, the second part of the track commences, the Icknield Way, a narrow corridor and ancient line of communication between South-West England and the East coast, a path worn steadily by traders, travelers, and invaders as far back as the Bronze Age.
On a night hike returning to his encampment in Latimer overlooking the River Chess, John Hargrave crossed the Icknield Way, inspiring the closing address of The Confession Of The Kibbo Kift, published in 1927, Hargrave’s public manifesto for a secret movement that was already seven years old.